Martin Luther King Jr’s second trip to Western North Carolina was in the summer of 1965, again following on the heels of triumphs and tragedies.

On July 2nd, 1964 the Civil Rights Act was signed into law by Lyndon B Johnson, barring discrimination based on race, color, religion, sex, or national origin in public places, accommodations, employment. It also barred the unequal application of voter rights requirements (although it did not ban such practices as literary tests that maintained unequal polling practices) and desegregated the schools (the Brown vs. Board of Education ruling in 1954 had ordered the desegregation of schools, but, well, they didn’t).

On March 7th, 1965 about 600 people begin a march in Alabama from Selma to Montgomery to demand voter rights for blacks – in 1961 less than 1% of voting age blacks were registered to vote in Montgomery County Alabama. At the Edmund Pettus Bridge in Selma (Pettus was a Confederate General and later Grand Dragon of the KKK) State Troopers attacked the peaceful protestors with nightsticks, tear gas and whips. The day became known in American History as Bloody Sunday, and the violence led President Johnson to call for voting rights legislation. In a speech to a joint session of Congress later in March the President outlined the ways that blacks were kept from voting, primarily in Southern States, including literacy tests such as reciting the entire Constitution.

On March 21 1965 the protestors reorganized the march from Selma to Montgomery under the protection of federal troops. Starting with 3,200 people in Selma, by the time the march reached Montgomery on the 25th it was 25,000 people strong.

On August 6th, 1965 President Johnson signed the Voting Rights Act into law with Martin Luther King Jr. and other civil rights leaders present at the ceremony.

The act banned the use of literacy tests, provided for federal oversight of voter registration in areas where less than 50 percent of the non-white population had not registered to vote, and authorized the U.S. attorney general to investigate the use of poll taxes in state and local elections. (After the act was passed the black voter turnout in Mississippi went from 6% in 1964 to 59% in 1969.)

In August 1965 MLK Jr was scheduled as the keynote speaker for the Presbyterian Conference at Montreat College. King’s visit to Montreat was delayed because of the Watts Riots in Los Angeles, California, which King notes at the beginning of his speech

“As you know, I was to be here on Thursday evening and, unfortunately, one of the most violent conflicts of our nation, ever in the history of our nation, developed in Los Angeles. And as one who has consistently followed a method and a philosophy of nonviolence, I felt it was absolutely necessary to respond to the invitation that came to me from the Negro leaders of that community to come and offer whatever counsel and advice that I could.”

King flew out to Los Angeles to help quell the violence that from August 11th-16th left 34 dead, 1,032 injured, nearly 4,000 arrested, and 40 million dollars worth of property destroyed. Rioting initially broke out after 2 white policemen scuffled with a black motorists suspected of drunk driving. Los Angeles had a long and well known history of known police brutality between white officers and brown citizens in  black and hispanic neighborhoods. Watts was an area segregated by race through long-time real-estate practices such as red-lining, and racial and social tension had been high because of these unfair practices. The Rumford Fair Housing Act of 1963 had made it law that landlords could not deny people housing because of ethnicity, religion, sex, marital status, physical handicap, or familial status, but the Act was overturned in California by Proposition 14 which re-legalized discrimination, leading in part to the Watts Riots. King talks about the disparities leading to racial violence in his speech – umemployement, poverty, lack of education and opportunities, prejudice:

“The church can do so much at this point to remind people that the Negro is not a criminal by nature. He may have the highest criminal rate in any community, but criminal responses are environmental and not racial. Poverty, ignorance, social isolation, economic deprivation breed crime, whatever the racial group may be.”

King went on to say

“…[I]n the Watts area of Los Angeles thousands and thousands of Negroes are unemployed. I went to talk to them and the one thing they said to me was, “We want jobs; we want some work to do.” And then somebody will say, “Well, aren’t you getting a welfare check?” The one thing they’ll say is, “We don’t just want to run downtown to get welfare checks. We want to work. We want some jobs.” At the bottom of many of the conflicts taking place today, in many of our cities, is the lack of economic opportunity.” 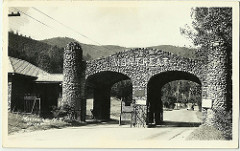 On August 21st, 1965 King delivered his speech The Church on the Frontier of Racial Tension, for 3,000 people as the keynote speaker for the Presbyterian Conference at Montreat.

As I’m writing this the motorcade for Rev. Billy Graham, who died of natural causes at age of 99 at his home in Montreal Wednesday, February 21, is moving through Black Mountain. Billy Graham lived in Montreat, a town of about 800, since 1943. He was supposedly friends with MLK Jr, and invited him to speak at his New York crusades in 1957 and reportedly posted bail for MLK JR. sometime in the 1960s. But MLK Jr’s famous ‘Letter from Birmingham Jail’ which he wrote in 1963 urges clergy, especially white clergy in the South, to take a stand against racism and for desegregation, and in his speech at Montreat he also pointedly states:

“All too often in the midst of social evil, too many Christians have somehow stood still, only to mouth pious irrelevancies and sanctimonious trivialities. All too often in the midst of racial injustice, too many Christians have remained silent behind the safe security of stained glass windows. But when the church is true to its nature, when it is true to the Gospel of Jesus Christ, and when it is relevant, it is always active in immaterial social change, seeking to guide and direct, seeking to bring the eternal variable of the gossips to bear on the particular situation. To use the thinking of St. Thomas Aquinas, segregation is evil because it is based on human laws that are out of harmony with the eternal, natural and moral laws of the universe.

According to a biography by Martin’s biography, Graham said of the protest in Selma  that only “a spiritual and moral awakening” would solve the nation’s race problems, adding that “if the law says that I cannot march or I cannot demonstrate, I ought not to march and I ought not to demonstrate.” In MLK’s Montreat speech he talks directly to this – saying “We cannot in all good conscience obey your unjust laws because noncooperation with evil is as much a moral obligation as is cooperation with good.”

King’s speech touches on other points he had spoken on before, notably in his ‘Letter From Birmingham Jail” speaking to the idea that black Americans be patient and wait for their rights to eventually be given to them:

…There are those who say that only time can solve the problem. I know you heard this argument. It is a myth of time. The idea that [there] is something in the very miraculous flow of time that will inevitably solve the problem of racial injustice. And so the people who follow this argument say to the Negro and his allies in the white community, just be nice and patient and wait a hundred or two hundred years and the problem will work itself out.

Well, there is an answer to that myth. It is that time is neutral. It can be used either constructively or destructively. And I say to you, my friends, this afternoon, that I’m convinced in so many instances that the people of ill-will in our nation have used time much more effectively than the people of goodwill. It may well be that we will have to repent in this generation, not merely for the vitriolic words and the violent actions of the bad people who will bomb a church in Birmingham, Alabama, or who will shoot down an Episcopal theological student in Lawrence County, Alabama, but also for the appalling silence and indifference of the good people who sit around and say wait on time.

Somewhere along the way we must come to see that human progress never rolls in on the wheels of inevitability. It comes through the tireless efforts and the persistent work of dedicated individuals who are willing to be coworkers with God, and without this hard work, time itself becomes an airlock of the primitive forces of social stagnation. So we must help time. We must always realize that the time is always right to do rightly…

King’s speech is powerful, and much longer than what I’ve captured here, and it eerily and disappointingly relevant today, 53 years later. King ends his speech repeating the word of Thomas Jefferson, “ who in the midst of an age amazingly adjusted to slavery could scratch across the pages of history words lifted to cosmic proportions: “We hold these truths to be self-evident that all men are created equal, that they are endowed by their Creator with certain unalienable Rights, that among these are Life, Liberty and the pursuit of Happiness.”